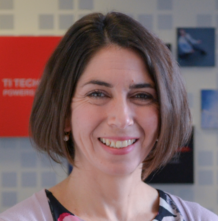 Viola Schäffer was born in Szeged, Hungary in 1974.  She received M.S. degree in electrical engineering from the University of Arizona, Tucson in 1999.  She joined Texas Instruments Incorporated (formerly Burr-Brown Corporation) in 1998 and has been working as an analog IC design engineer/manager at various locations including Tucson, Arizona, as well as Erlangen and Freising in Germany.   Her work focuses on precision signal conditioning including instrumentation and programmable gain amplifiers, power amplifiers, industrial drivers as well as magnetic-based current sensors and precision magnetic sensors.  She has led multiple technology-circuit co-developments and designed key enabling IP on these new process nodes.  She holds 18 patents related to this work with several applications pending, is member of the Technical Ladder Council, Analog Signal Chain Patent Committee and was elected Texas Instruments Distinguished Member Technical Staff in 2018.  She serves on the Analog Track program committee for the International Solid-State Circuits Conference and European Solid-State Circuits Conference.